If Govt. is graded on RTE Act, it would read, “Average. Can do much better!” 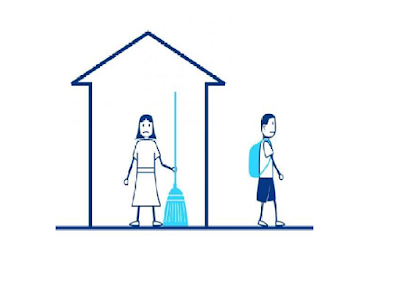 Picture this – Your maid’s daughter goes around with her, house to house and helps her out. This way they both make more time to be able to work extra houses to earn some extra cash. The kid is barely 6 and you desperately wish you could do something for her education. As noble as the thoughts are, the economics of reality don’t permit these romantic notions. With the familiar shrug of the shoulder, you chose to pass the blame to our favorite pantomime villain – the Government. And life went on…

This was back in 2009. 6 years have gone by since its introduction but there are still a lot many holes that need filling.

Education is the most powerful weapon which you can use to change the world.

Kids from the disadvantaged sections are supposed to get equitable and quality education and for that to happen the government needs to facilitate infrastructure that satisfy the norms and also keep improving pupil-teacher ratios. Methods are unavailable to calculate the inputs and outputs. Even the government grant reaches its destination after passing through several layers of corruption.

Are we spreading ourselves too thin by falling for the trap of focusing on coverage alone than quality?

Reservation of 25% seats in private schools and its implications

According to the Maharashtra RTE act, 25% strength of a class must be admitted from the disadvantaged section from nursery, but the new mandate introduced in late April 2015 applies the same rule starting Std. 1. This has led to confusion as to what should happen to the 25% kids who already exist from nursery. Also this led to many cancellations of confirmed admissions in kindergarten and this has left many parents bewildered. So now either government will have to fund for bigger classrooms or create a workaround for the new mandate. It feels like they keep digging themselves a bigger hole than filling it!

Many budget schools have closed out while many more are on the verge of closing – at a time when we need more! Almost 1.2 million government schools exempt from RTE. A Delhi-based think tank - Centre for Civil Society has shown in their analysis that 933 schools closed in Punjab and 219 more face the same fate. Almost 300000 schools became vulnerable post the introduction of the act endangering the opportunities of 60 million kids.

RTE is now available for your caste too!

Many states like Andhra Pradesh still have caste- based quota system for admission and skirt the RTE with ease. With this Act children will compulsorily receive education between class 1 and class 8. This defeats the purpose of tests and exams while disregarding the results.

Socio-Economic Classroom Divides
While this maybe entirely inaccurate but it seems like these decisions are taken in casual later afternoon meetings slurping on chai and samosas with one more keen than the other to dash out of the meeting and head home. How connected are these policy makers to the reality? Do they consider the ramifications of mindlessly letting kids from different economic background in the same classrooms and expect things to be simply work out on their own. As undiplomatic as it sounds, it is unlikely to ever happen and you will possibly have cliques of the haves and have-nots in classrooms and among parents and will pose a lot of unanticipated challenges to the school staff and management.

Clearly, the RTE had all the right intentions at heart but is doing great dis-service to the future generations by choosing to ignore the tangible and intangible challenges.

By Sqoolz HQ June 05, 2018
Introduction The Central Board of Secondary Education (CBSE) plays the supervisory role in implementing all the norms as per the NCERT curriculum. Although constituted in the year 1929, the board was renamed as the “Central Board of Secondary Education” in 1952. Following extension of jurisdiction of its activities with fresh amendments in its provisions of functioning, the board acquired absolute authority in exercising control over the schools, which have affiliations from it. Right now, the board runs 1500 affiliated schools in India and in 24 nations all over the world. Curriculum The Board takes all the initiatives to develop curriculum keeping in view the nationwide requirements for education. As it keeps the standards of quality as its prime objectives, it continuously carries out research and development to keep its curriculum at par with the best in the world. The curriculum targets to provide adequate space for the holistic development of the children, bo
311 comments
Continue Reading...